I’m notorious (well maybe just in my house) for wandering down internet curiosity holes. I see things re-tweeted in my twitter stream that catch my attention, like this:

The names of Donald Duck's nephews in various European languages.

Not that Donald Duck’s nephews names in different languages are that important. But this single tweet was liked maybe 19000+ times and retweeted 4000+ times.

Me? I am curious. Who is the author? It’s not by the account that tweeted it (I checked their site).

But there is in the image a URL, that’s the door at the top of the rabbit hole to a whole site of map images that show interesting things about words in different languages - https://mapologies.wordpress.com/, so many interesting ones I got tired of scrolling and never got to the end.

A few months ago the author was writing quite a bit more of background, like this map showing the various ways the word Vaccine is used in different languages

Most languages use a word derived from (variolae) vaccinae, however some use their own word, in most cases meaning “graft”. The Great Smallpox problem: Before injections, existed other …

And here they use, and attribute the Noun Project for an icon used in the map.

Yet the author of all these images, quite possibly worthy resources, who would appear to be making them on some base map collection, takes no credit or provides attribution/license info for their own works.

There is still plenty of work to do about open resources, yet it’s encouraging that so much is “out there.”

Sometimes you just have to scratch a little beyond the tweet or the quick share. I always find there is much more.

Rabbitholes can be portals to innovation…

And your mention of languages comes at the time I’m writing up my “experience fieldnotes” (in English) on #oeweek from a Francophone perspective.

So I’m at the entrance of my own rabbithole, which has to do with the relative costs of Higher Education in different parts of the World. The hunch, among some French-speakers, is that inexpensive HigherEd is part of the perceived slow pace for OERs in our language community. I’m not sure I fully buy that. Still an interesting notion.

Especially if, as @tannismorgan revealed five years ago, OE was probably a thing in Quebec 50 years ago. Just not textbook-based (or, really, focused on “content”).

And, speaking of language diversity, are there other language communities (say, Lusophones) which try to build language-specific OER movements?

Oh, as for that map of European names of cartoon characters…
A wellknown phenomenon is that some of these didn’t cross the Atlantic, including some which aren’t obvious from that map. According to the map, the showname for the Flintstones is the same between France and Quebec. The difference is in the personal names.

May I offer an effusive “merci” for these thoughts (with apologies to my high school French teacher, Monsieur Rivkin)?

It’s on my plate here (and I put it here) to create opportunities at OE Global where conversations and collaboration is not forced to be English only (you have my permission, which has zero impact, to share your notes en français).

Thanks for mentioning @tannismorgan I hope she gets a ping here, but I know she is very busy in a new leadership role. She also set up a site aimed at collecting (via a means where anyone can contribute) OERs in Other Languages https://oloer.opened.ca/

My hunch is there are definitely groups like you describe, I hope my colleagues here can surface specific examples. OE Global supports Spanish Speaking open educators via OE LATAM https://www.oelatam.org/ and can think of projects like http://relace.org/

I’m curious about this assertion of costs being a factor, it seems to me it’s more the long standing challenges of time and effort to create/adopt/integrate. I reach back to conversation with a community college physics teacher who’s first efforts at putting aside what textbook publishers gave him as close to plug and play activities, content, and organizing his own from OERs was an increased sense of ownership and stake in the content/experience. That seems to be something that is learned only by walking that road?

I would have never imagined that the Flintstones could be such an interesting case example of language! Might it be a desire to both bring part of the name across to the new audience, but still create a bridge to the original character?

And what does one translate for “Yabba Dabba Do”?

Thanks again for this.

I’m not quite sure about the rationale behind having different names. That aforementioned Wp page does address at least one name: the name «Miroc» (for “Mr. Slate”) came from Miron, which was the name of a stone quarry, right here in the Villeray neighbourhood.
«Caillou» instead of «Pierrafeu» is a significant shift. I’d say «Caillou» feels friendlier. It’s not too surprising that «Laroche» was used in the French version as well (for the Rubble family). It’s a pretty common last name in Quebec and it’s not that uncommon in France. Most of the Quebec first names used sound rather legitimate as local ones.

My guess is that the distinction in voiceover was part of the same idea. Several of the Quebec voice actors were wellknown, at the time. Having grown up in that era, their “avatars” are part of my deep memory. 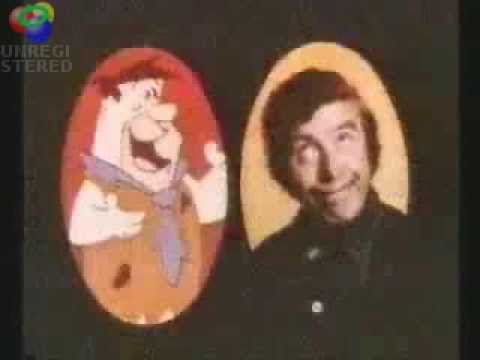 And the Quebec version really sounded “local”. I’d argue the show’s more deeply embedded in Qc than in France, partly because of cultural similarities between Canada and the U.S. (e.g. drive-thrus were probably more common, here).

That same effect has been very prominent in the Quebec version of Slap Shot. The language used is extremely crude… and representative of speech patterns in 1970s Quebec. In anthro, we used to point to that movie adaptation to people who wanted to know more about Quebec culture.

I’m noticing that Réal Picard was among the people who adapted the Quebec version of The Flintstones. He was involved in 38 adaptation projects. However, Picard took over from somebody else in adapting the original series so he probably didn’t decide on the names. As he’s been adapting many cartoons since then,

While this may all sound rather trivial, the topic of adapting OERs really isn’t. It’s a significant part of the effort done by eCampus Ontario, at least when David Porter came over from BC Campus. It’s linked to the difference between internationalization (i18n) and localization (l10n). The way l10n is practiced, it’s unlikely that character names would shift in most web content. In terms of learning, though, there’s a whole lot to be said about making every bit of content as locally relevant as possible. Those who translate resources meant to learn computer programming might have a lot to say about such issues as variable names.

There’s even something to be said about the links between l10n and a11y. In some ways, making OERs as accessible as possible is similar to making them culturally neutral, when that’s possible. However, it might be more important to make content appropriate in each cultural context instead of assuming neutrality.

And it goes further…

Women and Gender Equality Canada (WAGE) has developed the GBA+ model: Gender-Based Analysis Plus. Like a11y, GBA+ is most effective when you apply it from the start. Same with Indigenous Pedagogies. And every effort towards Inclusion, Diversity, and Equity. As a Kwantlen team noted, there’s significant value in paying attention to team members’ diverse skills when working with OER. Then it’s not about tokenization or paying lipservice to minority status.

It’s about building resources which lead to broad learning experiences.

I’m with you and don’t fully buy the notion that inexpensive Higher Ed is part of the leisurely growth of OERs in other languages. I realize it might have some impact, but as a native Spanish speaker I believe there are other cultural values to take into account, such as hierarchy, humility or modesty. Language comes linked with all its cultural attributes too and in many cases have higher impact in the adoption and creation of OER.

Another interesting project that has language at its core, and winners of an Open Education Award for Excellence in 2020, is:

Thanks for chiming in!
Project SALUS could be a useful reminder that “Latin America” isn’t uniformly Spanish-speaking. Native languages were on my Peruvian boss’s mind when I was working for Carleton’s Global Cybersecurity Resource. And I often wonder about the status of Brazilian Portuguese on the continent.

I agree @Enkerli, so many native languages around the world. Latin America has an extensive variety of them dating all the way back to the Pre-Colombian era.

The digitalization of resources and more so OERs have given the opportunity to rescue some of these languages that are clearly in danger of disappearing.