As a starter for OER thinking, last week over at Open Oregon @hofera shared in Updates on the Future for 2023 four big challenges her organization was pursuing in 2023. Are these on your map?

Peeking around the corner into 2023, the barriers preventing faculty from more widespread adoption of OER are the usual ones: time and money. Further, Oregon’s statewide OER program is working with faculty who are worn out by the ongoing pandemic and responding to heightened student needs.

Beyond these obvious constraints, though, here are four big challenges we’re thinking about right now.

Do these resonate for your program? Do you have something different on your mind?

This is a great question for us all to ponder! Read the post for more details of each challenge, respond to the poll, and please discuss below…

Which of the Open Oregon Four Big Challenges are part of your own or institutions focus for 2023? Please add details below or list others not included

Hi, I am curious to know how savings are calculated. For example, do you set an average dollar amount/ textbook? Do you include all students enrolled or a percentage? (I am aware that sometimes it is less because previously, not all students may have purchased the textbook). Is there a standard way to make these calculations?

Hi Kimberlee, this is a great question. I have a couple of blog posts about my approach to making these decisions: Estimating student savings from no-cost/low-cost course materials and Support for a Local Approach to Statewide OER Data Collection.

I also highly recommend the report that Katie Zaback wrote for MHEC last year: Toward convergence: Creating clarity to drive more consistency in understanding the benefits and costs of OER.

As a qual (instead of a quant), I’m particularly glad to hear more about ways to think impact beyond cost-savings. For instance, in this short webinar section: 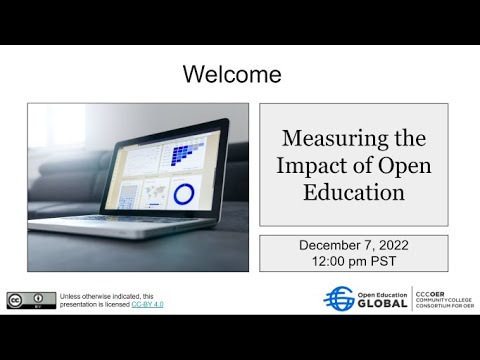 (16:12 to 23:03 in the video timeline)
The notion is, at some point, that Open Education in general is about “making a difference”… and that difference isn’t just moving a needle along a financial scale. After all, many things are happening with the ways people learn and about their motivations to engage in learning experiences.

So, yes, let’s work together on squiggly lines.

And translation is particularly relevant for the ‘G’ part of OEG. Some languages are at the forefront, of course. And we can think of “translation” as going beyond language diversity into adaptation in different contexts. Adapting Arabic OERs into French ones can be a fascinating process. As might be the move to adopt & adapt an activity from a Swiss workplace training into formal training at an institution in Côte d’Ivoire.

As for a third challenge which isn’t described directly in that post… Fostering open collaboration between diverse people and groups, including learners, learning professionals, information professionals, community organizations, technologists, (potential) employers, nonprofits, etc.
For all our shared values around collaboration, we need to recognize and mitigate our tendencies to mostly cross narrow paths.

Communicating course costs is big for us! We have a system where costs flow from the bookstore into the student registration system, but it requires that faculty order from the bookstore (not all do…some just give book lists and students buy online), and even harder: that faculty tell the bookstore if they are using OER or if there are no costs. We don’t yet have a good system for collecting this data in another way, though it’s important to work on.

A perennial challenge, though, is that registration is quite a bit earlier than the timeline on which many faculty make course materials decisions. In my own case as a faculty member, I am usually completely full up teaching during terms and sometimes make course materials decisions pretty late, after students have registered. I’m part of the issue!

This is because I frequently change my courses; it wouldn’t be so much of a problem with courses that are taught similarly, with the same materials, from year to year.

Those challenges ARE challenging.

Let me start by saying that when I first became aware of OER (2014 or so) it was clear that cost alone was not going to be enough to drive colleagues away from high costs texts. I certainly had the experience of this, trying to convince them. In a 2015 newsletter I wrote for the Committee on Computers in Chemical Education

If it is a college textbook, the professor. Publishers market their books to faculty, rather than to students who purchase them. . . . Textbooks are marketed and in great part selected based on the services that the publishers offer to faculty including such “traditional” features as publishers’ representatives, desk copies, solution manuals, test banks and slides and more modern apps including online homework systems.

I’ve spoken about this at many conferences since.

Today, certainly for STEM, the driver for faculty adoption is not textbook costs but the availability of online homework system. Cliff Lalonde and J Caldwell at BC Campus did a survey on the cost to students of commercial homework systems which average $80 Canadian per course per semester.

To meet this challenge LibreTexts, with co-sponsorship from the California Education Learning Lab, has built an open, online homework system, ADAPT which can be used self-standing or incorporated into our LibreTexts. It can handle questions from WebWork, ImathAS, H5P or QTI repositories. Working with Learnful, LibreTexts built an open H5P Studio to support ADAPT as well as the textbooks. (YouTube workshop on ADAPT).

Translation is another issue. In 2017, I began to look at the geographic distribution of LibreTexts users and was quite surprised. About 60% came from countries where English was a language learned in school. Students could obviously use the English language texts but they would be helped if those materials were available in languages that they grew up speaking.

We built the Polyglot Engine to translate books into other languages taking advantage of the uniform formatting in LibreTexts. Using Amazon’s AI translation app all 1000+ texts on our Bookshelves have been translated into Spanish and Ukrainian and about 50 texts into a sampling of other languages including French, Portuguese, Swahili, Arabic, Hindi and Chinese. In principle this can now be done for any pair of the 81 languages that the Amazon Translate neural machine translation service handles.

These translations from English language texts are useable, but not perfect. We urgently welcome anyone who will help editing, curating and improving them.

Thanks, Josh! Each one of the Libretexts responses-- APAPT, H5P Studio, the translated content-- alone are substantial! I’m confident you are going to be active during Open Education Week-- please add any events you are planning and these key resources to the site (now open for stuff)

Open Education Week’s goal is to raise awareness about free and open educational opportunities that exist for everyone, everywhere, right now.

How might be help coordinate some effort for the “editing, curating, and improving” of the translated items? Is there some way of organizing some kind of sprint effort?

I will be contacting you but hope we can corral some interest to join us for some live events or activities during OEWeek.

These offerings from Libretexts are definitely the kind of responses needed for these big challenges- thanks.