Six Degrees of Wikipedia-- can you get to 6?

I have to credit an accidental browsing of a session ideas for OERcamp.global (you really should look into participating in this 48 hour online unconference on OER).

I was curious when I saw mention of https://www.sixdegreesofwikipedia.com/ … and curiosity to me calls for a link click.

The idea is to enter names for two terms (it autosuggests as you type in the box) for WikiPedia articles that you would think are rather far apart, and the site finds the shortest number of hyperlink traverses to go from one to the other.

Inspired by the concept of six degrees of separation, Six Degrees of Wikipedia traverses hyperlinks on Wikipedia to find the least number of clicks it takes to navigate between any of the nearly six million pages on the world’s largest free online encyclopedia.

Enter the titles of two Wikipedia pages in the boxes on this site, click the “Go!” button, and discover just how connected Wikipedia really is.

My first effort was for my favorite food to the place I live now where (beyond my own kitchen) they are … lacking. 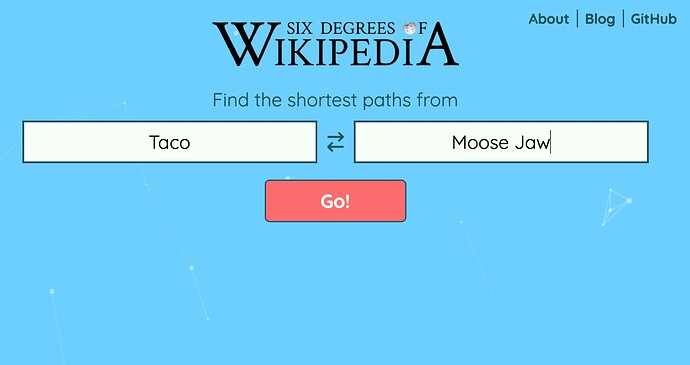 It was a matter of seconds to get results, many paths from taco to Moose Jaw on 3 clicks.

It generates a visualization of all the paths found, each node in the map links to it’s WikiPedia article. 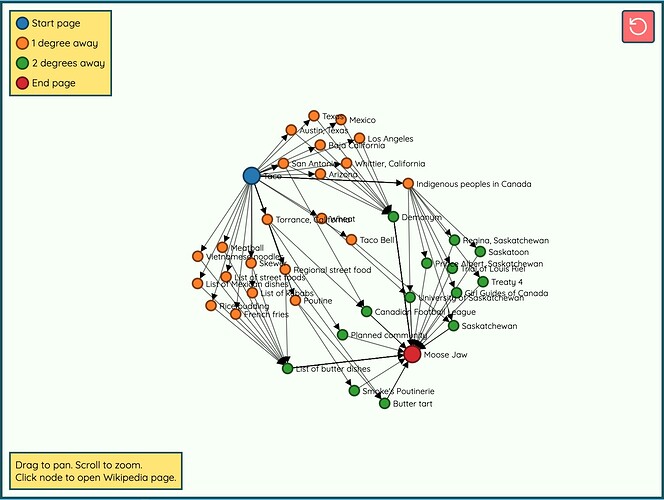 Hmmm, could I get more separated? What about a moon of Jupiter and a Taylor Swift album? That has many paths 4 degrees separated!

My best so far is a five degree separation from the malaria medicine Chloroquine to a man made lake in Sonora, Lake Novillo 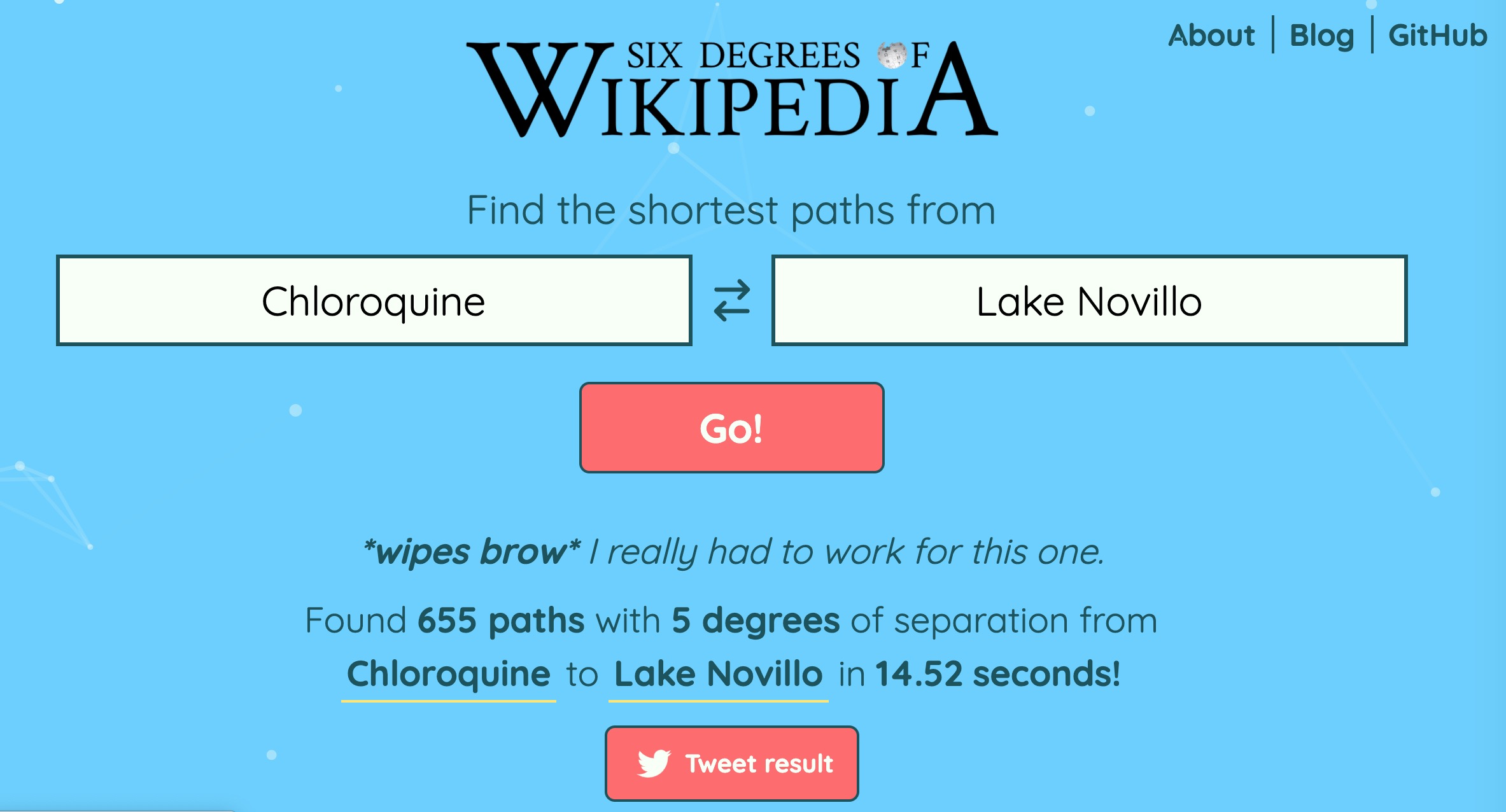 “wipes brow I really had to work for this one.”

Give it a try and see if you can find a six degree jump. It’s not easy!

Hello!!
I was totally mind blowed when I think on the possibilities, however, when I tried with my favorite twotypes of food (following the leadership of @cogdog) I felt inspired… Only three degrees from vegan to fritangas: 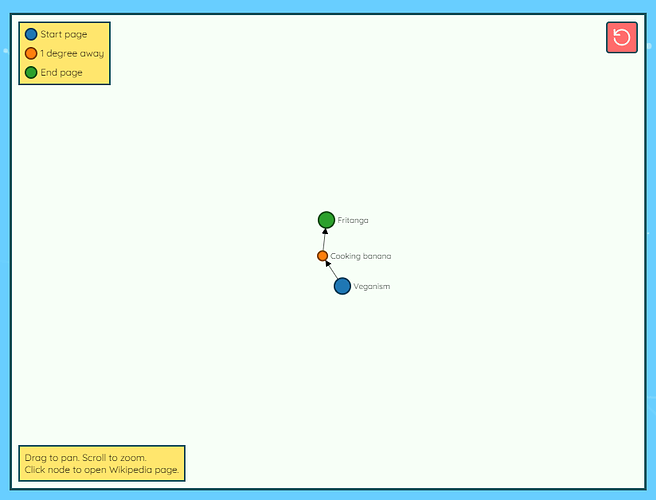 Thanks for playing. It seems like you have to aim for two things that are the most different and unrelated.

For what it’s worth, there is only one set from Tofu to Bacon

@cogdog I wonder how we can interpret those maps? I understand that the tool works from Wikipedia entries relationships, but what does a path mean, and what does a degree mean? I read both articles, the Tofu, and the Bacon, and I couldn’t find any relationship…

I can’t believe how intrigued I am

The game is how few hyperlink clicks it takes to get from one Wikipedia page to another. So if we start at the page for Tofu Tofu, also known as bean curd, is a food prepared by coagulating soy milk and then pressing the resulting curds into solid white blocks of varying softness; it can be silken, soft, firm, extra firm or super firm. Beyond these broad textural categories, there are many varieties of tofu. It has a subtle flavor, so it can be used in savory and sweet dishes. It is often seasoned or marinated to suit the dish and its flavors, and due to its spongy texture it absorbs flavours well. Nutritionally, tofu...

there is a direct link to the page for bacon listed under the section heading Elsewhere below Preparation (I used command-F to look for “bacon”).

Therefore Bacon it is one click away from Tofu. “Degrees” means "degrees of separation, or the same thing as the clicks I am counting). The map shows them directly connected because of that link.

For something more separated, we start again at the page for Tofu – how many clicks to get to the name for the pyramids outside of Guadalajara I saw when I was there? or to get to Los Guachimontones. It takes only 3 clicks and there are 4 different paths as shown on the chart of the results. If you click the dot on the graph, it opens the Wikipedia page you can see, but you can get there by:

The idea is to show how interconnected Wikipedia is. It is challenging to get higher numbers