Monday Pulse: Everything Wiki Except the 'Pedia

It’s Monday and we are again taking your pulse! You likely have heard of this great resource called “Wikipedia”, right? (note, sarcasm). There is a broader range of Wiki-powered open resources powered by the same engine, all part of Wikimedia,. The encyclopedia is not the only book on this shelf! 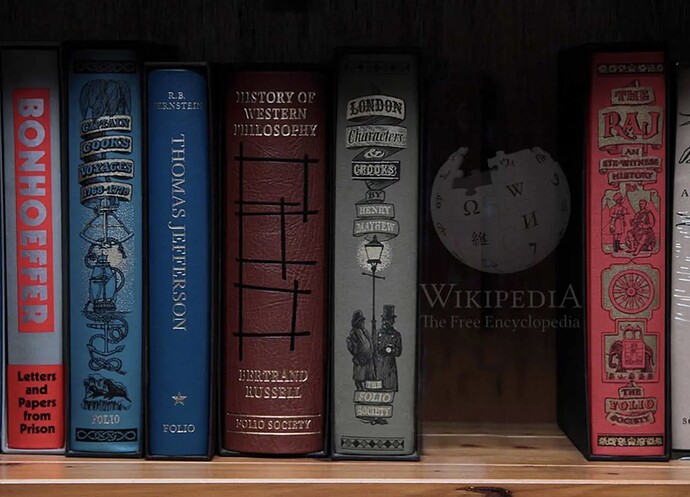 This week we ask you about your use of the other parts of the Wikimedia ecosystem- beyond awareness of them, which ones have you put to use in your work and/or have contributed to?

Thanks for voting,… but wait, there is more! Please share some detail how you have used one (or more) of theses Wikimedia sites? Or which ones have you contributed to and what did you add/edit?

Or, if any of them are new to you, spend some time exploring a few of these, then return here to share anything interesting you have found.

Note: This was inspired by the Open as a Question; Wikimedia as Example (not Answer) activity from the March 2018 Mural UDG project

There’s indeed more to this! Including some thorny governance issues that we tend to brush under the rug.

For instance, part of that famed OEG-Francophone session @Anthere, two months ago, mentioned les sans pagEs / les sans pagEs – foncEz!. It’s not so much of a Wikimedia project outside of the -pedia as an effort which recontextualizes the -pedia, in part because of the way things have been running.

As for the official Wm efforts you mention…
Like other people in my network, I want to use (and contribute to) Wikidata more frequently. So far, I’ve used it more peripherally, in tests for platform features having to do with Linked Open Usable Data in Galleries, Libraries, Archives, and Museums (aka LOUDGLAM or, more commonly, LODLAM).

In the past, despite my weariness with textbooks, I did use Introduction to Sociology - Wikibooks, open books for an open world in my teaching, though it was a bit too incomplete at the time.

For Wikiquote, my use does tend to be related to my work, though it’s rather occasional. What Florence was describing, as a very useful project, is to build pages of quotes from individuals who don’t yet afford the kind of mainstream attention which supports inclusion in the -pedia. I wish I could work with a group of learners to support that. There’s deep pedagogy in them thar hills.

Search Commons used to be my primary strategy to find CC-licensed images, until Automattic announced Openverse | WordPress.org. I still end up browsing through Wm Commons on occasion.

As for Wiktionary… Haven’t really used it in my work. I use very frequently in my life, especially as part of a way to figure out some terminology across languages and/or fields.

Oh, and Wikisource… More of an occasional thing. When searching for some specific material. A bit like my own “Quote Investigator” or Snopes.
Most recent example: trying to locate what Francis Bacon had used as misogynistic language to describe subjugating nature, as Douglas Rushkoff keeps mentioning on the Team Human podcast. I did eventually find a proper quote in Wikisource. It’s not one which has really been used widely, so it’s not in Wikiquote. And context made the case a bit more nuanced than the Rushkoff version. (An author had written more extensively about Bacon’s work from a feminist perspective and, in that case, it was more of an analysis than a clear-cut case encapsulated in a pithy quote.)

Great contribution for the Monday pulse.

The missing candidate in the check list is Mediawiki - the open source software that powers all the Wikimedia Foundation projects. The Mediawiki software development is coordinated by the Wikimedia foundation and powers thousands of wiki’s outside of the Mediawiki family.

I hear you. not a sin of omission nor commission. The choices are all ones powered by that software, I left off a few to keep them parallel.

But I am game to frame a new pulse focussed on FOSS, if you have a way to frame it so it provides clickable choices and opening for replies, like asking how many have made say a jump from $ to Foss for say different tasks??

Wikimedia Commons has been super helpful for MIT OCW as we research CC licensed images for use in our materials.

But I am game to frame a new pulse focused on FOSS, if you have a way to frame it so it provides clickable choices

Good idea for a future pulse. It would be interesting to see what FOSS tools open educators are using. A list of popular apps that are free as in freedom as apposed to free as in beer.

Besides using Wikipedia on an almost-daily basis for one thing or another, I use a number of other sites in the Wikiverse, both as a giver & a receiver. It’s pretty easy to contribute images to the WM Commons & before I travel somewhere, I’ve made it a habit to check the “requested photographs” lists to see if there are any photos requested for the places along my route. For example, here are the current image requests for BC, Canada.
I have also contributed some curriculum to Wikiversity… seemed like a good way to recycle curriculum for which I owned the copyright.

Loving this conversation! Out of the list, I have only ever used Wikimedia Commons (and I use it a lot, mostly for images). Some of these I didn’t even know existed, like Wikivoyage and Wikispecies. One area I’m particularly interested to look more into is Wikidata…I feel like that is one that I sort of know peripherally exists and could probably be something I might use or contribute to, but I haven’t taken the time to really dig into it. Thank you for the inspiration to do so!

We got some Wikilove happening already! I have a vested interest having just taken the Wiki Education Wikidata Institute for which I am planing to add my notes ASAP. It was intense, 3 weeks, and I have a bit of information whiplash.

Wikidata Will is a fantastic facilitator and very generous with individual help!

I do have plans being hatched or ideas fermenting about generating some ways we might harness some OEGlobal effort into Wikidata activity. It can be very low stakes if the point of adding information is clear.

Like many others here, Wikimedia Commons is one of my regular goto places for locating open licensed media. To me, it’s a smaller entry step than understanding Wikipedia, and as @ginabennett indicates, they have many ways to indicate where they have needs.

Somehow others have added a lot of my open licensed flickr images (60000+ now) to Wikimedia Commons (when I lived in Arizona, a guy named Pete (?) who tended a lot of articles added many photos. Tools like flickr2commons make it ridiculously easy to add flickr images to the Commons. Searching on my flickr user name shows 11000+ have made that jump.

My curiosity about Wikidata came in 2014 while I was on a 5 month Open Learning Fellowship at Thompson Rivers University and a colleague tweeted about Wikishootme. This generates a map of your geolocation (or anywhere you pick) to show an indicator of red dots the locations of places that exist in Wikidata that lack a photo. 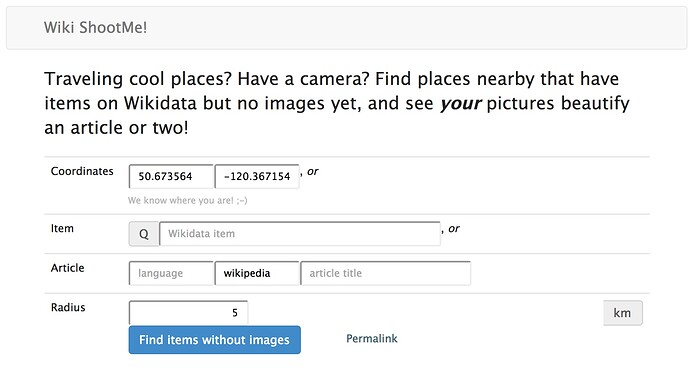 Wikishoot (and that *thing* about wikis)

creative commons licensed ( BY-NC-ND ) flickr photo shared by ·S That thing about sensing good light also applies to links. And the people who are linking them. Sometimes, you just get a good intui…

This whole exercise struck me as something easily valuable to have a class, a community group, collaborate to add to Wikidata, and fill in gaps.

I’ve dabbled only briefly with the SPARQL Query language which can be daunting, but now I have a much better understanding.

This experience seeded a long time the desire to organize others to have this same experience, and I want to ramp this up now at OEGlobal. So let me know if you are curious/interest in joining some Wikidata escapades.

Also, I am a huge fan of this year’s support Specialist OE Award winner, University of Edinburgh’s Wikipedia in Residence, Ewan McAndrew. And I am looking forward to hopefully recording an OEG Voices podcast episode with Ewan, where I will be picking his brain for ideas.

While it’s not part of the Wikimedia Foundation, the venerable WikiEducator is worth mentioning in this context. It started as a project of the Commonwealth of Learning and moved to being attached to the OER Foundation. I gather that these days it primarily supports the OER Foundation’s OERu programmes, but it’s also available to anyone who wants to make use of it.

Oh I forgot, out of sheer curiosity I peeked at Wikispecies. It of course has familiar features, like my favorite, Random! yielding:

Bizarre. Then I looked up one I know (not by heart, I had to find my own photo), a small cactus that grows up here in Canada, with beautiful pink spring flowers. I know it as Ball Cactus, but here it is more properly 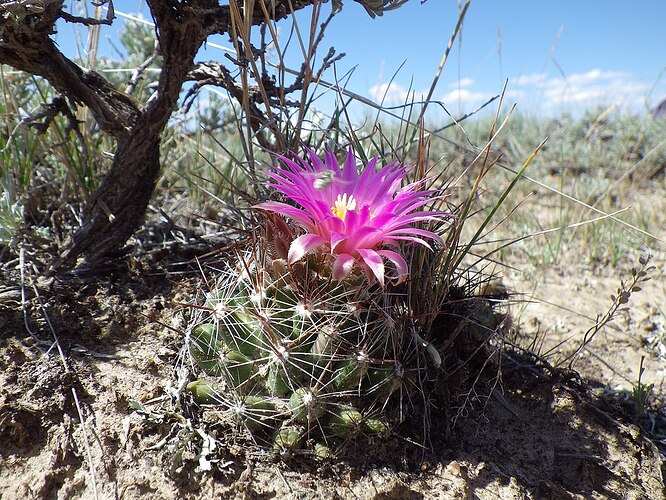 I am guessing the point is to navigate up and down the classification trees, and I would bet this is all driven by Wikidata (?)

A post was split to a new topic: Wiki Loves Women - #SheSaid and Wikiquotes

I was coming here to add Wikishoot me! It’s a great tool.

If you are too short on time to add images or dig them out of deep archive, here is a very quick contribution tool: you can help both Commons and WikiData by using the ISA Tool that @Anthere and I developed for Structured Data on Commons. You also get to see some incredible images too!

The tool uses your suggestions to link descriptions to the wikidata item of the elements that are depicted in the image. Which in turn makes each image more useful and searchable. You can add descriptions and the wikidata items in languages other than English, so please do use it if you are a multi-lingual genius! if you are unsure at what level to add the depicts description, read @Anthere’s excellent guideline on what is a quality depicts item.

There is a Wiki Loves Africa campaign

currently running, but many others that might also tickle your interest!