At one of my first conferences in the 1990s I walked into a room, and found I was the only attendee! The presenter seemed hesitant to present, but I wanted to listen. So rather than do a formal presentation, we had more of a conversation.

Reminds me of unconferences. They might have become less trendy, after becoming as elaborate as most formal conferences. Yet there’s something of this approach which remains fully relevant. Conference sessions need not be a numbers game. (Apart from some line items for accountability.)

Without going “too meta”, there’s something interesting about trends in conferences. Including events which aren’t framed as conferences.
As noted in another thread, much of #OEweek felt like a decentralized conference, including a form of hallway chat.
Some of the most impactful moments come from having informal conversations with diverse people (likeminded or not) who participate in a session with this type of openness. Or with people who want to hear about a session after the fact.

Between now and Nantes, many interactions are likely to contribute to the OE movement while happening “under the radar”.

WOW!!! This is a great step-by-step to inducting new faculty to OER. Maybe look for some way to loop back, so this can be a continuous or permanent process. I always look up to this “optimal” open process: https://www.researchgate.net/figure/An-optimal-Open-Education-cycle-Hodgkinson-Williams-et-al-2017-p-32-Image-CC-BY_fig1_332468165

I always thought that “raising awareness” was so floppy as an objective, without any clear outcome and normally reduced to a snapshot.

Hello @Enkerli regards from Chile, let me follow up on your interesting reply.

First, let me agree with you, that focus on doing OER can help you explore and practice OEness (like that acronym!!) as a way to innovate in the learning and teaching process, basically with student/learner-centered pedagogies.

Second, after the venue with @GinoFransman wondered on something that’s been on the scope for years now, and how we can take larger steps, how can we scale and mainstream the adoption and impact of Open Education. Because I have the sense that a focus on doing OER can better introduce you to these practices, but normally reduced to the personal experience and agency, normally disconnected to peers and specific contexts. I think this is so much more common in K-12 as the professional development approach is so much different and scarce than Higher Ed faculty. Are we condemned to another forced trade-off?

I think we can learn a lot and “remix” from the Open Government Partnership OGP. In a decade, more than 100 countries around the world are creating national action plans co-constructed by public institutions, the academy (HEd) and civil society, thanks to an open framework. It took a precise problem definition (democracy at risk, need to re-engage citizenship, etc.) and three domains of the solution (participation, transparency and accountability) catalyzed by ICTs potential. Today is an incredible hub of innovation share globally and grounded locally that has reshaped to relation between the public sphere and citizens.

Why not think about a similar partnership framework to promote “OEness” to K-12 education, where you have tremendous post-Covid challenges, very much centralized and connected actors, where you can co-construct answers built on innovative learning and teaching, sharing and inspring best practices from local to global, and viceversa.

Any thoughts on how to focus on doing to introduce and embrace open, but in scale or mainstreaming?? Thanks and hugs to @cogdog and @paulstacey.

By the way, Chile celebrated 10 years of OGP with a publication a couple of months ago: https://www.ogp.gob.cl/wp-content/uploads/2022/01/Libro-Voces-de-Gobierno-Abierto-en-Chile.pdf

In page 76, there’s an article of mine (in spanish though!!!) discussing the role of OGP in civic education and how open, OER in specific, has and can contribute to OGP action plans and how to educate “open” citizens to be active civil agents. Best wishes!!

I think we can learn a lot and “remix” from the Open Government Partnership OGP.

In fact, when we created a “Massively Open and Nimble Online Collaborative Learning Experience” on Public Engagement (Learn4PE, as I called it), the OGP is what was driving us. At the time, Canada was OGP co-chair. Laura Wesley, our team’s Executive Director, worked through the Multi-Stakeholder Forum for OGP (alongside people like Jean-Noé Landry, then at Open North, now at the Obama Foundation. Lots happening in the Government of Canada (GC), around that time.
It was the first MOOC-like experience within the GC… where Stephen Downes works.

Nowadays, the OGP connections might sound less obvious. Still, there’s OEness in the GC, as was obvious during LearnX. Two useful examples (that I’ve shared previously; thanks Discourse for the warning):

So, @wernerio, you might be the person I need to ask… Are you aware of other initiatives by governments and public servants to share OERs? When “dOErs” talk about govvies involved in OE, it’s mostly about policy or funding for educational programs. Yet public servants get involved in other aspects of learning.

innovate in the learning and teaching process, basically with student/learner-centered pedagogies.

Another theme on which your insight would be appreciated!
Been on a trail, for the past year, about the links between 21st Century OE and Open Pedagogy movements from the mid-to-late 20th Century. It was really impactful in Quebec. 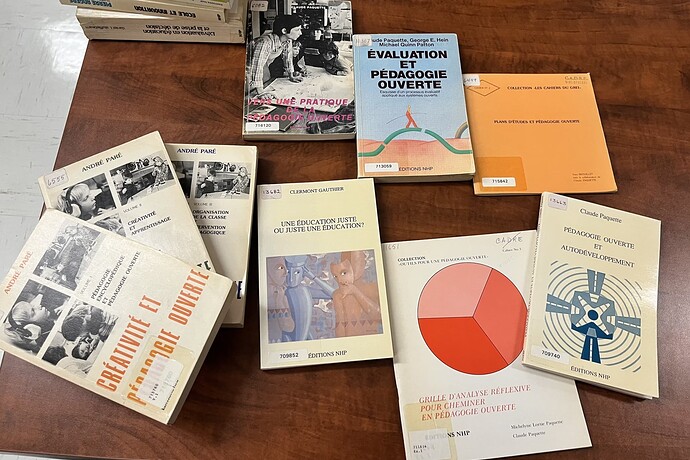 We’ve all gone to school in such a learner-centred system and there have been multiple attempts at reforming education, most revolving around learners’ needs (though a move towards ungrading was thwarted, 20 years ago).
To this day, Quebec learners have tuition-free access to high quality education (including a large part of post-secondary education). Which leads to student strikes (including yesterday and ten years ago) about university tuition.
Yet, somehow, we’ve mostly moved away from the whole pedagogical trend towards openness. Sure, we’ve been creating OERs for a while (contrary to some claims). And Open Research has been lively for a long time. Not to mention all sorts of community-led initiatives to help people learn. (My favourite is University of the Streets Café (concordia.ca))

Yet approaches to school-based learning have become much more focused on teaching, especially in post-secondary education.

I hear a number of people talk about “The Global South” as though such models were completely absent. “Oh, you know, in those ‘countries’, the ‘sage on the stage’ model is the norm. Very hierarchical. What we do in the North is completely foreign.”
What puzzles me, though, is that I also hear about the impact people like Freire, Illich, and Abreu have had in parts of the World which are generally considered to be part of “The Global South”.

So, my questions would be:

Thanks a lot for the insight!

(As usual, apologies for length.)

Hello @Enkerli , I’ll take my best shot with these sensible questions with my (very) limited knowledge:

Are you aware of other initiatives by governments and public servants to share OERs?

You can spot a couple of examples in Latin America: In Uruguay, the public sector pushes for OER from a ground-up experience, nurtured by teachers and reflected in a public OER repository. In Higher Ed, they have more open initiatives (online programs, MOOCs, UNESCO chair, open data, open science), mainly driven by the public university, Universidad de la República. Meanwhile, in a whole different story, Brasil has made OER part of their public procurement models and procedures that prioritizes open resources. This was an OGP initiative. OER has also been part of nation-wide teacher professional development and educational leadership training strategies. I think this is an extension of other open approaches, for example, early embracing open source IT solutions.

What inspiration can we draw from those earlier parts of the history of Open Pedagogy?

So many inspirations in the history of education that tie up or cross today’s “OEness”. When you look in history, you’ll find that today’s educational system is very recent (1850s), functional to the national development models in a industrialized world. But before that, learning was a personalized, driven by specific needs, responsive to local context, shared positive values and virtues. I always look up to Maria Montessori and her story and struggles to humanize learning and question the one-education-fits-all industrialized, national, public education system. I also look up to Paulo Freire, our major reference in education from Latam, so many ties with open.

What made “us” shift away from those modes of learning, worldwide?

This is personal fiction, but since you ask

, the national public educational system cannot fit, is anachronic in a rapid-changing world that has propelled the demand for learning and education in all sectors of society. This has led to a privatization of education (1970’s and so on), new actors and governance of educational delivery, that relies on the need of standards, metrics, evidence-based assessment, quality assurance, etc., all components of a “standarized education”. In short, the precariousness of the public educational sector, leads to a standarized education promoted by the privatization. Hope this makes sense.

Thanks for your comments!!!