For announcement October 15, 2021 winners in the four categories of the Open Assets Award.

Open assets are what open education initiatives produce and use, tangible goods (usually digital) with educational purpose and value. Open assets are produced, curated, and distributed in ways that make them freely accessible, usable, and improvable by others.

An outstanding example of OER reuse, remix or adaptation. This may include examples of significant iterative improvements of resources including translation and localization.

By the end of this course, you should be able to: Define Open Educational Resources Explain the rationale for OER adoption and use Explain the differences between the six currently available Creative Commons licenses Identify repositories and other...

Texas Learn OER is a set of openly licensed, self-paced modules for faculty, staff, and administrators adapted from ACC Learn OER by Carrie Gits at Austin Community College for the Digital Higher Education Consortium of Texas (DigiTex). (Gits created ACC Learn OER in 2018 for her capstone project for the SPARC Open Education Leadership Program.) Released in August 2020, Texas Learn OER serves primarily as an introduction to OER, including such topics as understanding, licensing, finding and evaluating, and adapting and sharing OER, and there is an opportunity to earn a certificate of completion. The modules have been peer-reviewed by both state and national OER experts and are regularly updated, and continuous improvement plans include annual releases of more significant revisions to ensure the content is relevant and up-to-date.

Because it is licensed CC BY, Texas Learn OER can be adapted for any local context; for example, shortly after it was launched, Rice University in Houston remixed it to create “Owls Learn OER.” We are even prouder that the impact of the training, in less than a year, has extended beyond Texas’ borders. These adaptations have included (but are not limited to) the “OER Starter Kit for Faculty” at Northern Virginia Community College, “Open Educational Resources: Basics and Beyond” by the Online Consortium of Oklahoma, and a soon-to-be released remix from the Michigan Academic Library Association’s OER Interest Group.

We at DigiTex, along with Gits, believe that Texas Learn OER and its adaptations are exemplary examples of Open Education collaboration and community, as well as of how the CC BY license benefits the field and higher education in general. 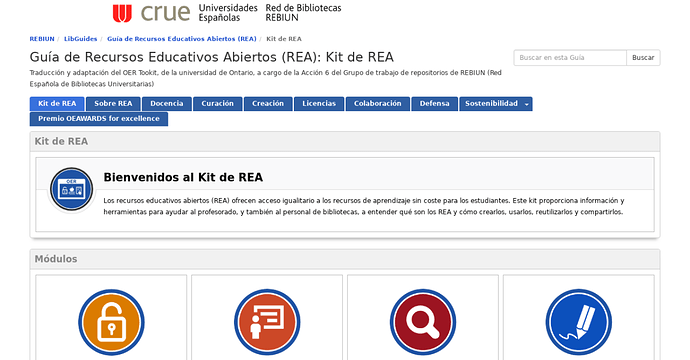 The reasons that inspired us for this nomination are several:

Firstly, because it is an example of an Open Educational Resource (OER) that deals with OER: a toolkit aimed at teachers and librarians to explain how to create, use, reuse, share and implement OER into teaching and learning.

Second, because it is an example of reuse. It is an adaptation of the original OER Toolkit created by the Colleges Libraries Ontario and the Institute for the Study of Knowledge Management in Education (ISKME). It is shared with the same license as the originating resource, CC-BY-NC. At the same time, it has been reused to generate new OER toolkits.

Third, because it is an OER co-created collaboratively between the libraries from REBIUN (the Spanish network of Universities Libraries), from a specific action dedicated to OER in the REBIUN repositories’ working group. It is made with contributions from different colleagues, who curated the resources in a very professional way and who also enjoyed doing it.

Another reason is because it is an OER in Spanish, since most of the OER are in English we found this especially important and useful for the Spanish-speaking community. In this sense, it is aligned with the OER UNESCO Recommendation of encouraging inclusive, equitable and multilingual resources.

And last but not least…because our kit de REA has had a great acceptance and impact in the Spanish and Latin American educational environment, among teachers, librarians and other stakeholders. It has been disseminated in several courses, webinars, and conferences, as well as institutional websites, blogs from universities, social media, etc. We have received significant interest, various questions and demonstrations of gratitude. Some users have recognized that the Kit of REA has been useful for creating and using OER. That is the best result and the real success! 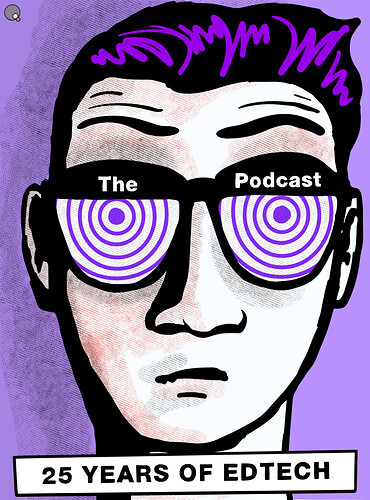 This project is an outstanding example of the power of OER reuse for the following reasons. - Remixing the physical book into an audiobook has increased accessibility by providing the text in an alternate format.

The podcast is also hosted on open infrastructure in BC, Canada and syndicated onto all major podcast platforms for discoverability. AUPress host their books on the Manifold open publishing system, and have also linked to the audiobook version. The main podcast is produced by Clint Lalonde and the Between the Chapters podcast is produced by Laura Pasquini.

Even through the language translation artifacts of Google Translate I see such great value in the Kit de REA REBIUN (OER Kit) and how it has been both remixed and augmented from the original versions.

In addition to their alignment with the UNESCO Recommendation for inclusive and equitable access, I also see how the kit part on OER Sustainability is also part of that alignment.

One of the significant benefits of open educational resources is the permission for others to reuse, adapt and remix them. These permissions are often under utilized but these three initiatives show just how powerful and effective it can be.

The Carrie Gits Texas Learn OER is a great example of how an original creation can be enhanced, adapted, and continuously improved by a community to ensure relevance and currency.

I love the way REBIUN has engaged a collective of librarian colleagues in a curation and adaptation process. Even better is that the result is in Spanish!

And finally the serialized audio version of Martin Weller’s 25 Years of Ed Tech is a creative and wonderful example of both a remix conversion of a print book into an audio book and also how adding a deeper dive and critical analysis can build on and enrich an original work.

Congrats to all these projects for showing the full potential of reuse, remix and adaptation.

Thank you all so much for this award! It has taken Laura and I a few days to coordinate our schedules to record a proper thanks so this acknowledgment is a bit late. But I thought since we are an audio project, we should thank everyone in audio format.

And here are all the people who provided their voices, thoughts and opinions to make this project possible (and deepest apologies if I have missed out anyone)

Thanks Clint and Laura for responding here in the most appropriate format for your remix project, but as well for taking this idea of remixing open to something new and also open. And it’s a credit to the idea to see how many people got to be part of it.

We at DigiTex, with Carrie Gits, are so honored to have Texas Learn OER recognized with this award. The timing is perfect, too, as we recently launched an enhanced version of the training, with an increased focus on OER and equity; updated OER initiatives, legislation, and activities in Texas; and interactive concept reviews at the end of modules, among other enhancements.