Do you like to cook? Do you have speciality dishes that you’d like to share? Do you know or have recipes that reflect the local food in your part of the world?

Share your recipes with a reply! Show us making in a video, photos, or just list the ingredients, steps, and special techniques. Share your recipe with a “seasoned” open license (“By Attribution With Extra Cayenne Pepper”).

As recipes start to appear, give one or more a try, and report back with stories and photos of your attempt at someone else’s recipe.

Someone has to start this off, it might as well be me.

My sister who lives far away texted me a photo showing how my niece had baked one of my Mom’s regular dishes, a noodle casserole or: 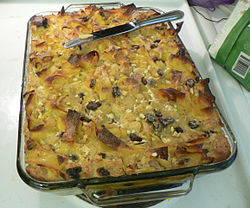 Kugel (Yiddish: קוגל‎ kugl, pronounced IPA: [ˈkʊɡl̩]) is a baked pudding or casserole, most commonly made from egg noodles (לאָקשן קוגל lokshen kugel) or potato. It is a traditional Ashkenazi Jewish dish, often served on Shabbat and Jewish holidays. The name of the dish comes from the Middle High German kugel meaning 'sphere, globe, ball'; thus the Yiddish name likely originated as a reference to the round, puffed-up shape of the original dishes (compare to German Gugelhupf—a type of ring-shape...

This is a staple at holiday dinners but also at Jewish events. Mom, who passed away in 2011, also supervised many kugels made in her role as director of the kitchen at her synagogue.

My sister had a copy of Mom’s recipe on an index card. I recognize her all caps handwriting: 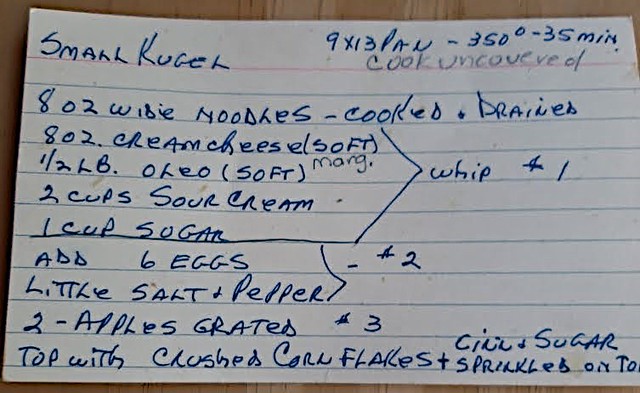 The thing I find about recipes on the internet is that that are often very similar for the same dish, but also noticeably different. That’s what makes it fun to try.

My step daughter made the kugel alongside Ukrainian traditional dishes of my wife’s family for our recent Canadian Thanksgiving. The good thing about it, is that it tastes great cold as leftovers, I had a slice for breakfast: 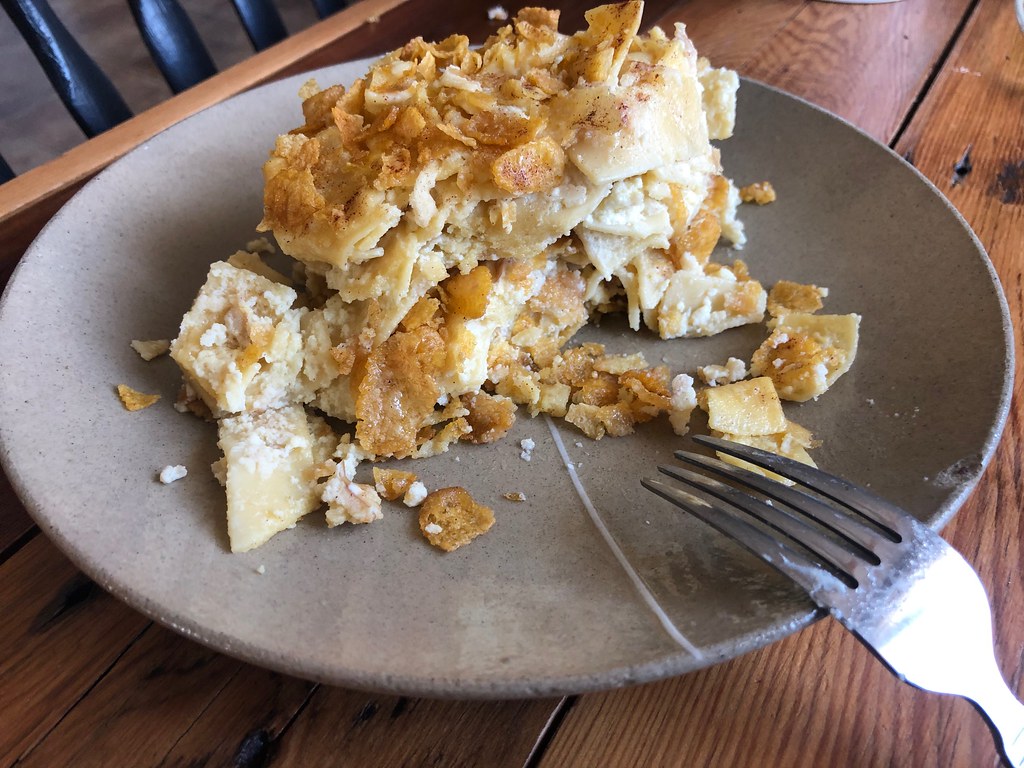 So there you go, a recipe for Mom’s Kugel, I found another photo of a card she had written out for me, and just to show that recipes are not precise, it also includes in step 2 to add 2 tsp of vanilla and 1/2 cup of raisins.

I will give this a try doing conference week and maybe someone else might try to “remix” it themselves. My playful license is CC BY-JM (Creative Commons By Attribution to my Jewish Mother).

How about sharing a recipe from your kitchen?

Hey, thanks for sharing! Want to know what is “oleo (soft)” as mentioned in the recipe?

I would be sharing a recipe soon and maybe more if permitted.

And thank you, Ajita, for replying! That’s a good question, and the same one my step-daughter asked me. So “oleo (soft)” would be margarine or you could use softened butter. I find the fun part of cooking is you can experiment with ingredients.

More recipes are not only permitted, but encouraged!

We hit a cold spell last week and my eggplants were no longer growing. I’m now looking for a new recipe for the last of our fall harvest which I picked this morning.
They are rather small compared to a month ago but would love suggestions for how to prepare. I’ll choose the best recipe (that isn’t too hard :-), prepare it, share the results. Thanks in advance you eggplant lovers out there … 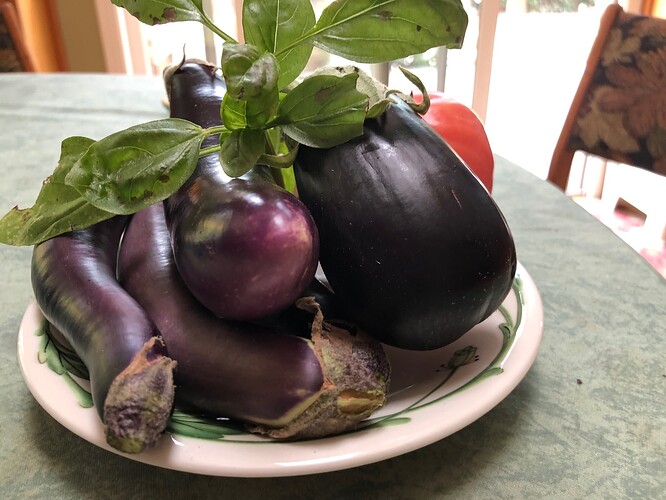 Dinner tonight reflects how much our world is intertwined in food --pretty much as this wonderful Open community!
So more than an exact recipe allow me to share the construction of a Global Mexican taco. 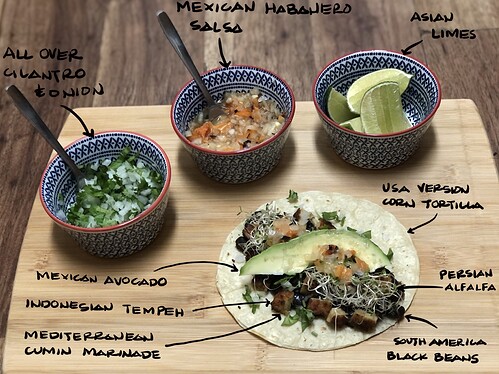 Let me know what is your version of a taco?

Those are gorgeous specimens, Una! My sister had a recipe I loved and I cannot recall it at all.

My go-to fall back for most vegetables is slicing them in maybe 3/8" thick, tossing in a ziploc with olive oil garlic salt and other spices, and grilling on the BBQ (Edamame this way is awesome too).

I think almost everything works if it includes fresh ingredients.

My taco love grew considerably after a few project visits to Guadalajara, where our favorite street taco place (so many visits I cannot count) called La Choza. They grilled a wide variety of meat (e.g. carne asada), even deer, seafood, topped with fresh local veggies, and the option of quesadilla style where the tortilla and cheese were warmed on the grill. 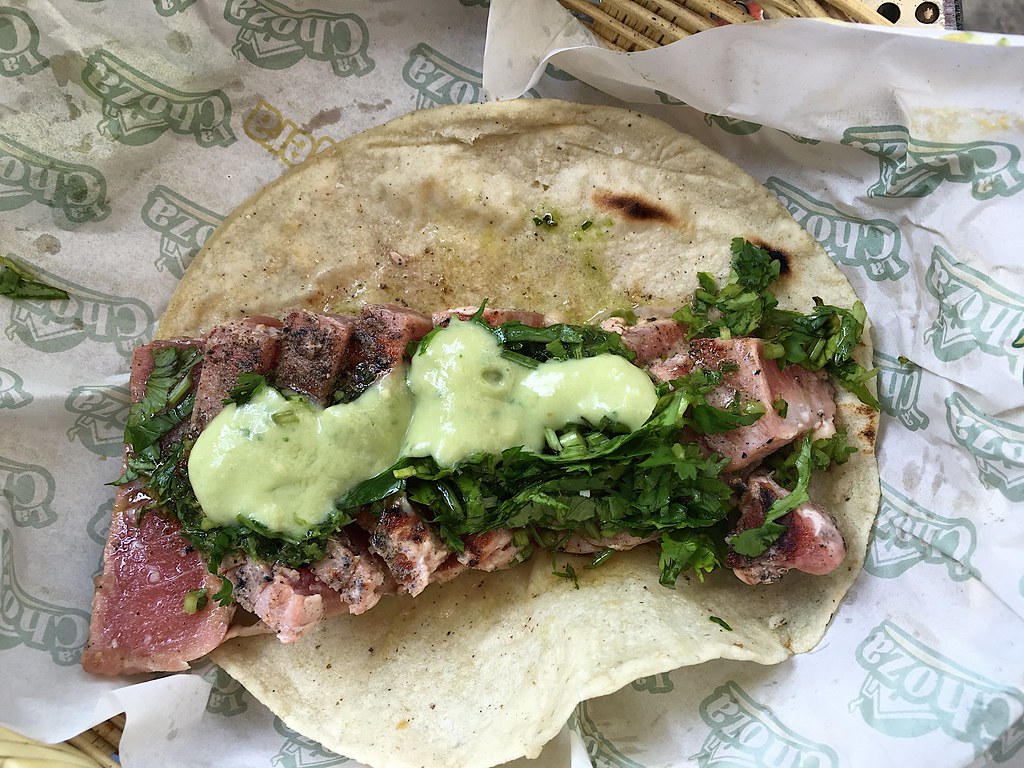 “Yes, a Tuna Taco” flickr photo by cogdogblog https://flickr.com/photos/cogdog/27050136383 shared under a Creative Commons (BY) license 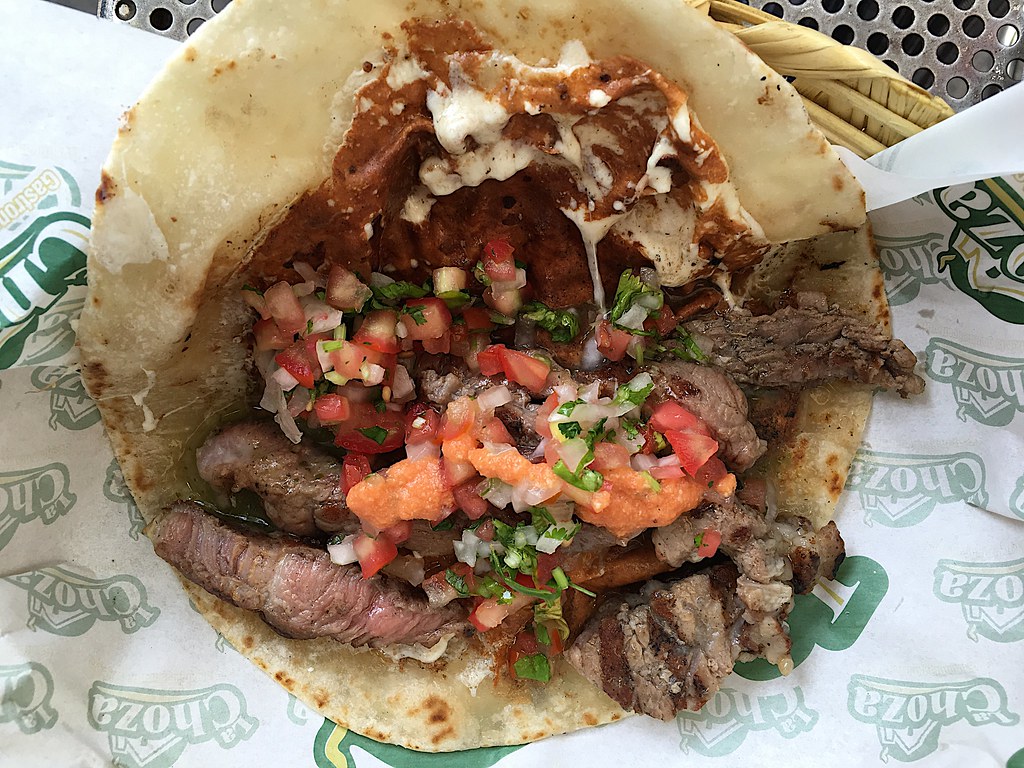 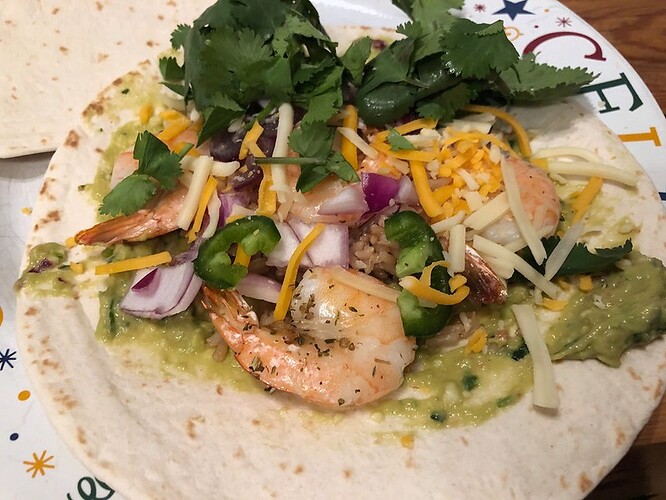 It just so happened that I was searching for a recipe to use with some lamb mince that I have in the freezer from the whole lamb we got last month. It’s moussaka - an old favourite that features aubergines https://www.bbcgoodfood.com/recipes/moussaka

Here’s a recipe that might come in handy if you have a turkey at Thanksgiving or Christmas or any other feast featuring turkey on the menu. Elise’s Christmas soup

Great posts here!
I’ve been to Taiwan many times and always look forward to the delicious food. Too bad we’re not on site. Any Taiwanese recipes?

Wow! These are wonderful @cogdog, I see you are a true taco connoisseur!

I’m glad to know you became a taco loco in the right way. Visiting street tacos in Mexico, that is.

I’ve been to La Choza in Guadalajara too and love it! They have so many varieties it’s difficult to decide.

I have to say, street tacos are the best. I agree that anything can go in a taco as long as the ingredients are fresh.
The Glorious Shrimp Taco looks amazing!

Thank you Frances. I love moussaka and its been years since I have made it. I really like that this recipe has potatoes – another favorite of mine particularly as the weather gets cold. I’ll see if I have enough Aubergine/eggplant to make moussaka and keep you posted. Una

They look fantastic! We do have a couple of recipes here! We call it “Baingan”- so we have an all time favourite- baingan bharta which is a kind of a salad or a side dish. We just apply some oil to it and roast it, deskin it. Then mash it up, add chopped onions, tomatoes, green chillies. You can drizzle some oil or add tempering (which is preferred). Some people also like to add curd instead of oil. Serve with fluffy rotis (Indian Bread) or maybe rice. Enjoy! It comes out yummy!

Worth noting in the context of “open” that recipes are not copyrightable.
How wonderful.

I was vegetarian for a long time and although I’m not anymore I thought I’d share a recipe I still make regularly.

Tofu, at least where I live, is increasingly available in a variety of forms.
Medium or firm tofu works best for this recipe.
But if you only have access to a soft tofu put it in a cloth (like a dish towel) and put something heavy on it (like a frying pan) to press water out for 15-20min.

Cut tofu into cubes.
Sauté in butter and garlic for 5-10 min. 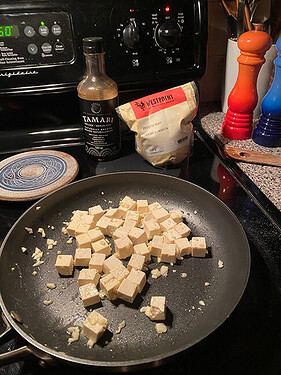 Add tamari and gently toss.
You want the cubes to absorb the tamari. 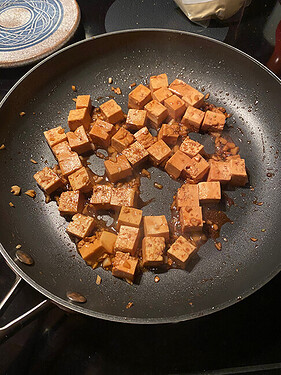 Sprinkle on engevita yeast.
And gently toss.
You want to coat the cubes with it. 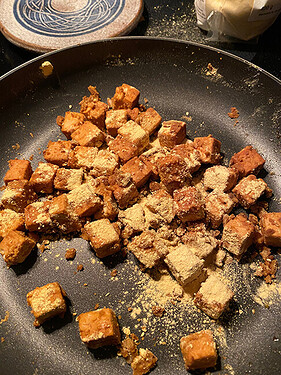 I serve this with basmati rice and baked sweet potato. 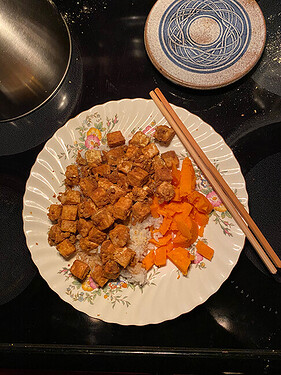 Some yeasts taste horrible but engevita yeast has a delicious roasted nutty flavour. It’s also super high in vitamin B which is hard to get if you’re vegetarian.

This dish has a unique taste, a fusion of asian and kentucky fried.
It’s addictive.
My kids loved it growing up.
And even people who claim not to like tofu tend to like this.

Visuals can be supplied upon request. 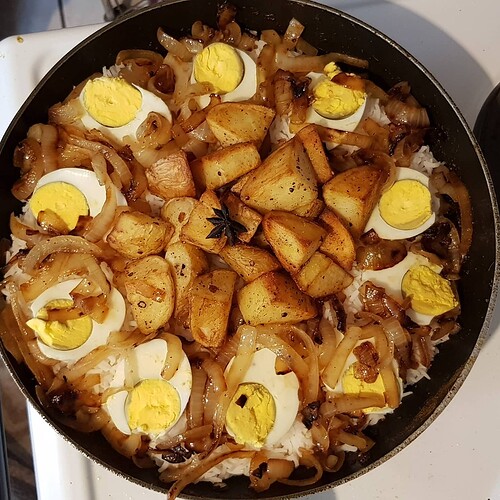 IMG_20201005_220835_7941440×1440 209 KB
One of my favourite dishes to make in bulk and share, being a feeder at work and our neighbourhood!
It’s gotten us through a lot of OpenEdInfluencers work!
This is a Cape Malay Chicken breyani/ biryani. It’s too long to type out, but here’s a trustworthy version 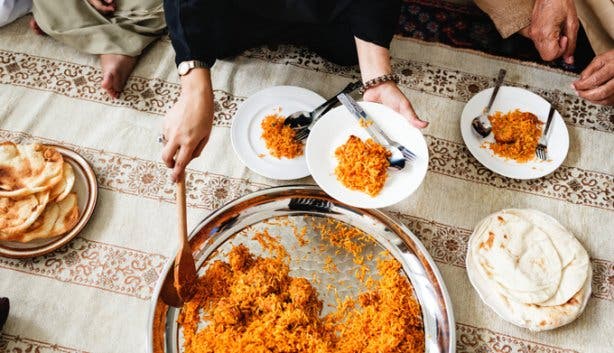 A Breyani Family Recipe, Plus a Quick Version

A traditional recipe reworked through generations by Nadia Slamag owner of halaal cooking service, Let Me Cook For You in Athlone. She first learned how to make breyani from her mom as a child.

I miss the office for this. I can vouch for the biryani dish. If I knew the pandemic was coming, I would have asked @GinoFransman to make in bulk and freeze it. Delicious dish indeed!

These recipes are amazing!! I LOVE this thread! Can’t wait to try to make them! Here is one I would like to share

It is for “ceviche” but not the one most people are used to. This recipe is from Ecuador, from the highlands. I made this video as a model for my students for an Open Recipe and Family Histories Book we created in one of my classes.
Here is the “ceviche” video: 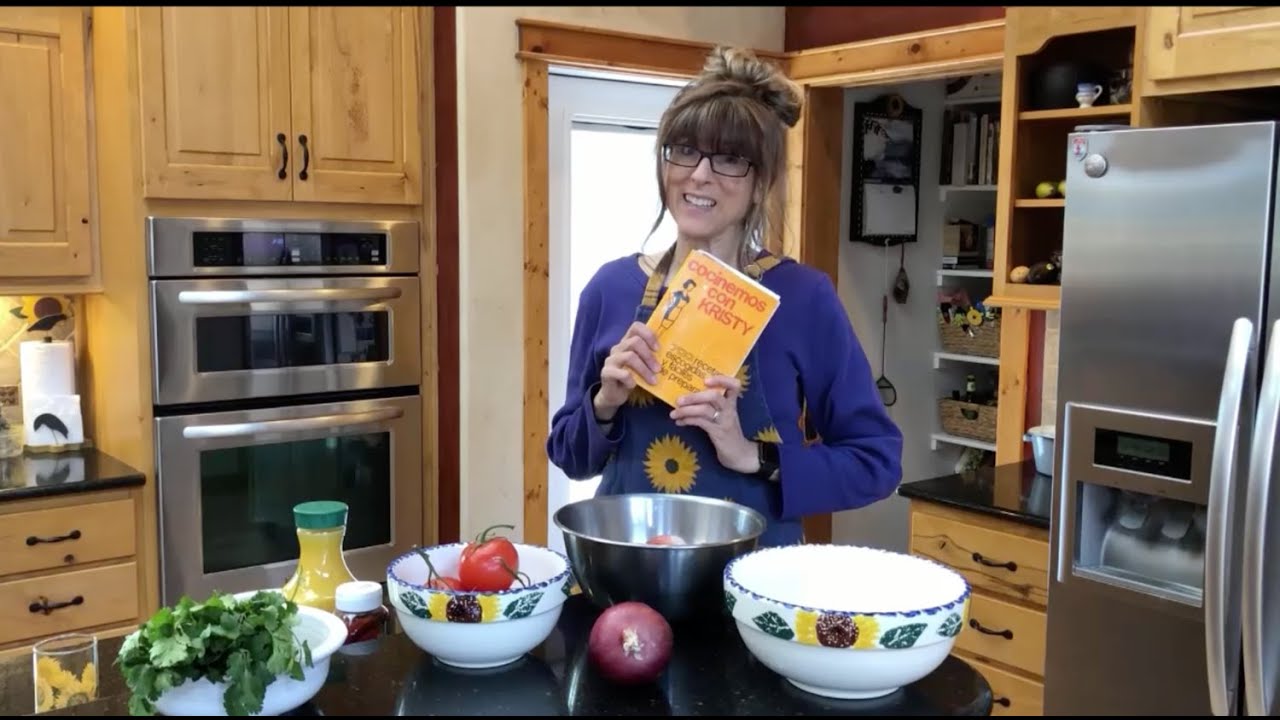 HERE IS MY STUDENTS’ BOOK WITH LOTS OF RECIPES: http://bit.ly/3kD48Do

Oh, no! I have just found this thread and now I am sooo hungry (its 8.30 pm at me time zone)!!! I will post some recipes from Poland tomorrow as the revenge’